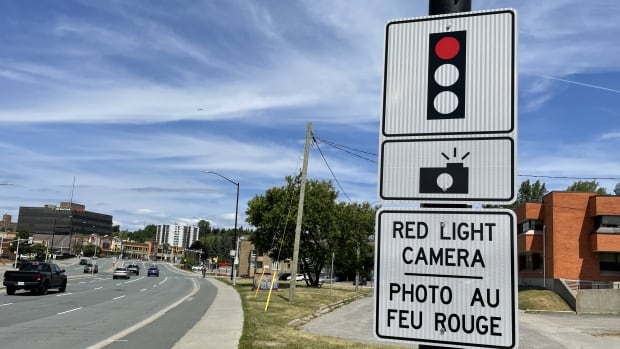 The City of Greater Sudbury’s six new red light cameras are active as of today, the City has confirmed.

The registered owner of a vehicle that runs a red light at one of the six intersections will be fined $325.

Since the cameras cannot determine who the driver is, no demerit points are awarded.

Joe Rocca, the city’s acting director of infrastructure and capital planning, said other municipalities equipped with cameras have seen a 25% reduction in angle collisions, when a vehicle collides with the driver or passenger side of another vehicle.

“And it’s not even just at the intersection where they’re installed, but nearby intersections where a red light camera is installed have been shown to have a reduction in collisions,” he said.

Rocca said the cameras only take pictures if someone goes through a red light. If the light is still yellow when someone crosses the intersection, but turns red halfway through, they will not receive a ticket.

He said, for example, that drivers who cross an intersection to make a left turn, but can only make that turn safely after the light has turned red, will not be ticketed.

The system is designed to track the speed of a vehicle and determine in advance whether it will be able to stop before a red light. If someone is driving too fast towards the intersection, the camera will take a first shot.

He’ll take a second photo when they’re halfway through the intersection, after going through a red light.

“With these two images and the vehicle speeds recorded, there is enough evidence to support an offense to say that a vehicle ran a red light when the traffic light changed from amber to red,” said Rocca.

“There is nothing more important than the safety of our residents,” he said in a statement.

“Red-light cameras have been proven to reduce right-angle collisions at intersections. This important program will make our roads safer for everyone, and I look forward to seeing the results.

In an email to CBC News, Greater Sudbury Police Service Sgt. Blair Ramsay said road safety is a shared commitment and police are working closely with the city to address issues.

“Motorists are reminded to plan ahead when traveling to reduce the desire to speed on our roads,” Ramsay said.

“Give yourself plenty of time to get to your destination, slow down, observe speed limits, leave space between you and the vehicle in front of you, and never drive a vehicle while intoxicated. We want Everyone arrives safely.”

Red light cameras are located at the following intersections in Greater Sudbury:

Drako: AI will monitor cameras around the world